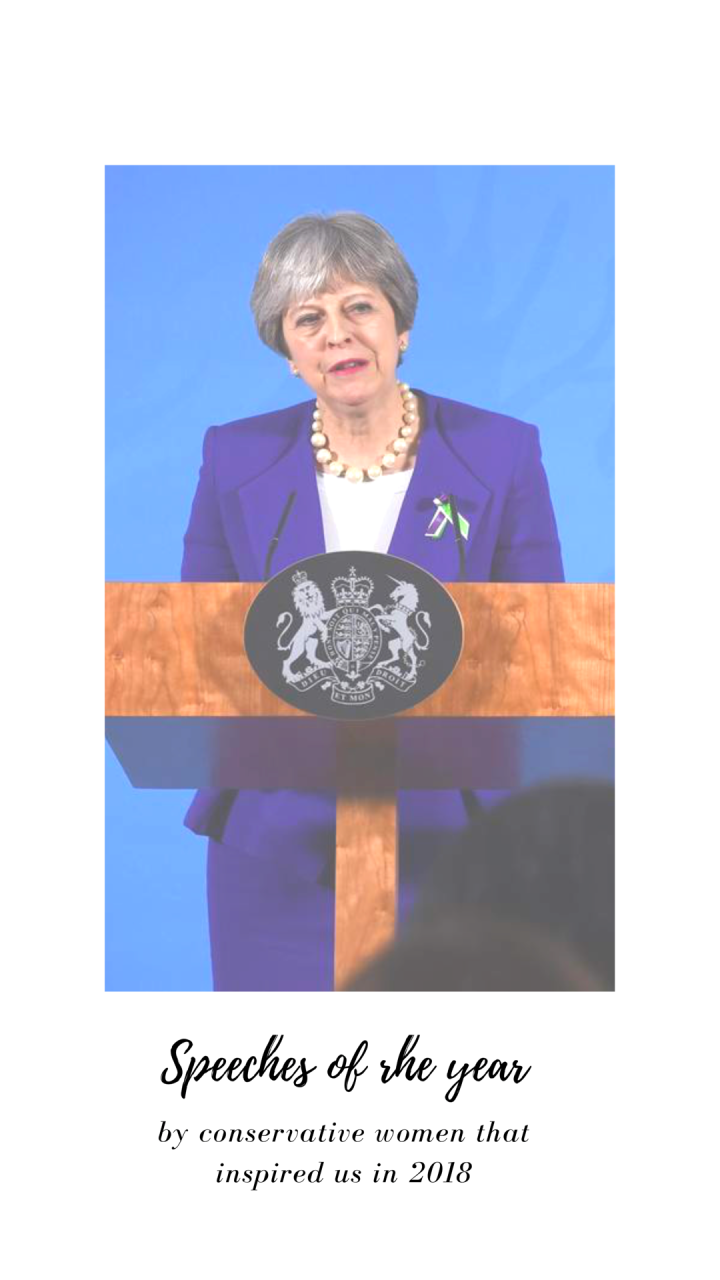 In two thousand and eighteen, we marked a hundred year since some women gained the right to vote – and it was a year filled with inspirational speeches from Conservative women. These speeches dealt with tackling abuse in politics, abortion in Northern Ireland, brexit (naturally!), women’s rights internationally and the first use of sign language by a Minister in the Commons.

In February, the Prime Minister was in Manchester to mark a centenary since the passage of the Representation of the People Act. As well as paying homage to the suffragettes who “fought to establish their rights – my right, every woman’s right – to vote in elections, to stand for office and to take their full and rightful place in public life, did so in the face of fierce opposition. They preserved in spite of all danger and discouragement, because they knew their cause was right. Eventually, through a free and open encounter with the opposing view, the truth of their argument won the day and we are all in their debt”.

She used the occasion to bring attention to the “tone of bitterness and aggression (that) has entered into our public debate”, and the heightened abuse candidates, politicians and journalist are facing in the age of social media.

“British democracy has always been robust and oppositional – but a line is crossed when disagreement mutates into intimidation”.

Social media companies must now do more to tackle online abuse and intimidation as “such abuse risks undermining the diverse democracy we have built in this country over succeeding generations”.

In the wake of the Standards in Public Life Committee’s report, the Prime Minister committed the government to taking action which will “make our electoral process more robust and offer greater protections for people taking part in elections” including consulting on making intimidation of candidates and campaigners an offence in electoral law. Due to targeting of candidates at their homes, local government candidates will be given the same protection as parliamentary candidates to keep their home address secret.

“Women in the 19th Century had to contend with open hostility and abuse to win their right to vote. In the 21st Century, it cannot be acceptable for any women – or any person – to have to face threats and intimidation simply because she or he has dared to express a political opinion. Sadly, that has all too often become the case”.

“I have been there. I am making it my business”

Heidi Allen reflected on her own personal experience when she spoke in support of women in Northern Ireland being granted access to reproductive health care.

“Are you seriously telling me that in a civilised world – rape, incest or a fetus that is so sadly deformed that it could never live, are not grounds for a women to have the power to decide for herself? That she shouldn’t make that decision? No. Enough.”

The Secretary of State for International Development made history in July by becoming the first minister to use sign language at the dispatch box. Speaking ahead of the Global Disability Conference, Mordaunt said – and signed – that “for too long, in the world’s poorest countries, disabled people have not been able to reach their full potential because of stigma or not enough practical support. I am proud to be focused on this area which has been neglected for too long”.

One of the political mic-drop moments of the year came when Theresa May held a press conference at Downing Street following the European Council summit at Salzburg, making clear that “throughout this process, I have treated the EU with noting but respect. The UK expects the same. A good relationship at the end of this process depends on it”.

The Prime Minister rebuked the EU for their visible lack of respect towards the United Kingdom – and herself – during the Salzburg summit and made clear that in the event of no deal, EU citizens living in the UK would have their rights protected and that the government “will do everything in our power to prevent a return to a hard border”.

“But the EU should be clear: I will not overturn the result of the referendum. Nor will I break up my country. We need serious engagement on resolving the two big problems in the negotiations. We stand ready.”

The Leader of the Scottish Conservatives used her speech at Conservative Party Conference to speak against calls for a second referendum, “we must respect the democratic choices we make – or we undermine the principles we all claim to uphold”. She made clear that you “don’t get to demand a re-run just because you didn’t get what you want. That way leads to more division, more rancour and a politics trapped in the past”. Davidson called for a return to “our Conservative principles” as the “future of our country is at stake” so the “practical, pragmatic and utterly Conservative approach that will get us through”.

“And I want to make a plea. To look behind the sound and fury that passes for our politics just now. Where the extremes get ever louder and the centre falls to silence. Where more energy is expended on Twitter spare and below the line comments, than on making it that bit easier for those who come after. The people whose daily hopes, worries and aspirations should be at the heart of all we do”.

October – Theresa May at CPC

The dancing queen was the new comeback kid.

In her wide ranging – and largely cough free – speech, the Prime Minister announced the end of austerity, defined the party’s message and spoke against a second referendum, labelling it a “politicians vote”.

“Leadership is doing what you believe to be right and having the courage and determination to see it through” which included honouring the result of the referendum. A second vote would be a “politicians’ vote” in which they would be telling “people they got it wrong the first time and should try again”. Echoing her post-Salzburg speech, the Prime Minister made clear that “we will not betray the result of the referendum, and we will never break up our country”.

Her speech defined the party – and her personal ideology – as one that is “moderate and patriotic – one that puts the national interest first…we must be a party that is not in thrall to ideology, but motivated instead by enduring principles. For me they can be summed-up in three words: Security. Freedom. Opportunity”.

“Rigorous debate between political opponents is becoming more like a confrontation between enemies. People who put themselves forward to serve are becoming targets…you do not have to agree with a word Diane Abbott says to believe passionately in her right to say it, free from threats and abuse.”

In her opening speech of the conference, Mordaunt stated that “those who went before us started a great movement for equality. Let us be the generation that finished the job”. She used it as an opportunity to speak about sexual and physical violence against women, the twenty-five million backstreet abortions that occur every year, the horrors of FGM and the barriers of girls education.

“In 2018 we should not have to have a fight on our hands to get women’s rights mentioned in summit documents, especially when that summit is the G7. Enough. Unless we enable every woman to reach their full potential, humanity won’t reach its. Unless women and girls thrive, our nations won’t.”